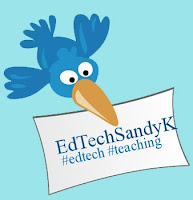 The Personal Learning Network (PLN) that I've built on Twitter over the past couple of months has become an amazing resource for learning about what's going on in the educational technology world. I was excited when I had an opportunity last week to present using Twitter as a tool for personal learning to some of my colleagues. Although I knew I wouldn't have time to share everything I've learned or done over the past couple of months with them, I wound up reflecting back in some detail on my own journey as I prepared for the presentation.

The list that follows is a result of that reflection. You might think from reading it that building my Personal Learning Network (PLN) has been a linear, methodical process, but in reality I stumbled my way through and saw the steps I took only on reflection. I almost titled this post How To Build a PLN on Twitter, but that would imply that there really is a specific "method".

One thing I've learned about using the web and Web 2.0 tools in general is it's often "messy"; that is to say there are not usually step-by-step guidelines for doing this or that. So glean what you can from the list below. What worked for me may not work for you, but I hope you find a nugget somewhere that might help you along the way.

If after reading the list below you find yourself wanting to know more, you might want to check out these PLN related blog posts from @kylepace and @shellterrell, or take a peek at my first PLN building post (before I knew it was called a PLN!). You might also want to check out my Twitter related links on Delicious. Tons of informational resources there! (NOTE: As of 2011 I am using Diigo as my primary online bookmarking tool. You can now access my Twitter related links there as well.)

I reference the building of an educational technology (edtech) PLN below, but you can apply the same principals to building a PLN on your topic of interest.


This is what has worked and continues to work for me in my PLN building:

Well, that's it! That's where I am and how I'm operating now. If anything stood out to you or you have other tips on building a PLN, I hope you'll comment and share!


5/6/12 Update - I am amazed by how often this blog post gets visited or resurfaces on Twitter, two and a half years after I originally wrote it. It was early in my PLN building when I wrote this post, yet each time I revisit it, I find it still pretty accurately represents the process of building a Twitter PLN. Earlier this year I presented a three hour workshop on Twitter for Professional Learning at the 2012 TCEA Convention in Austin, Texas. If you liked this post, you might also benefit from the resources from my presentation, which I published in a Livebinder here. Hope to see you in the Twitterverse! Be sure to comment below or Tweet me and let me know if any of this information was helpful to you. ~ Sandy Kendell, AKA @EdTechSandyK
Posted by Sandy Kendell on October 12, 2009