Screen Recording is Built in to #iPad & #iPhone Running #iOS11 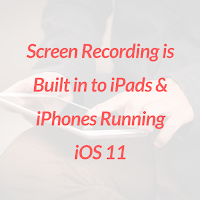 With the release of iOS 11 in September of 2017 came a great new feature which can have multiple uses in classrooms. The ability to video record what is happening on an iPad or iPhone screen, as well as narrate over the recording, is now a built-in feature of iOS devices.

You may not realize that the screen recording feature is an option because it is not turned on by default when you upgrade to iOS 11. I found out about it through Twitter myself.

Below are instructions for turning on screen recording and using it for the first time.


To turn on the Screen Recording feature, follow these steps:

In the video below, I demonstrate Screen Recording on an iPhone. I also share a few tips for making your screen recording projects better as well as a few ideas for how to get the video off of the device once it is recorded.


Slides From the Video

Since I recorded my video on an iPhone, the information on the slides is kind of small! You can view the slides that are in the video below.

Have you used the iOS Screen Recording feature in teaching and learning? Have your students? If so, please share in the comments so we can learn from your ideas. Thanks!


All original work in this post by Sandy Kendell is licensed under a Creative Commons Attribution-NonCommercial-ShareAlike 4.0 International License (CC BY-NC-SA 4.0). Please see specifics on my re-use policy before re-posting/re-using any of my blog content.
Posted by Sandy Kendell on November 20, 2017