“Media production engages and excites; it leads to unexpected discoveries, increased self-awareness and esteem, sharpened critical thinking, analytical skills, group work skills, and ability to communicate ideas” (Garrison, 1999). In following educational blogs and research over the past year and a half, I have read themes similar to Garrison’s many times over. A number of educators are writing about the engagement and growth that multimedia production encourages in their students. I have not personally worked much with multimedia production, and having been out of the classroom for ten years did not have the opportunity to work in this medium with students. Over the past two weeks, however, the readings in our Multimedia and Video Technology class as well as last week’s personal digital story project and this week’s video editing experimentation and podcast assignments have stimulated my interest in multimedia and video editing. I was excited when a blog post called Doing a “FLIP” Across the Curriculum (Zimmer557, 2010) came across my Twitter stream on Friday because it was full of ideas on how to use FLIP video cameras in the classroom. I know I will grow in my knowledge of this area even more over the next three weeks as we work on a group project to produce a public service announcement, and I look forward to continuing to find new ways to use multimedia to reach teachers for professional development as well as to encourage them to design engaging multimedia projects with their students.

Video is one medium of multimedia production that can be used to reach teachers and engage students. According to Desktop-Video-Guide.com (n.d.), after shooting and capturing video to a computer, the next step is to edit the video by adding effects, transitions, titles, and even sound. This week, we were given the task of using and evaluating two different video editing software packages of our choosing. Since I work in a K-12 school system with a technology budget that we stretch as far as possible, I decided to look only at free video editing solutions. The two options I experimented with were YouTube Video Editor and Windows Movie Maker. 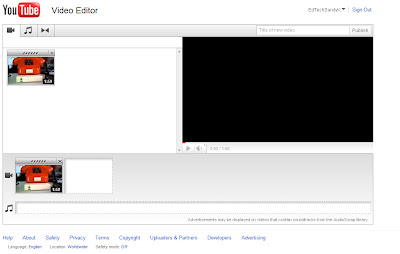 YouTube’s Video Editor just launched in mid-June of 2010. I found a couple of tutorials on the Free Technology for Teachers blog prior to experimenting with this program. Before you can use YouTube’s Video Editor, you must first upload a video or videos to YouTube. Once the videos are uploaded, you have a few editing options. These options include trimming the videos from the beginning or the end, combining two or more videos into one single video, adding one of three transitions between videos, and replacing any existing audio in the videos with a single song sound track from YouTube’s AudioSwap music gallery. When you are finished with your editing, the Video Editor renders an entirely new video combining all of your edits and publishes it to YouTube. YouTube’s Video Editor is in its infancy and as many online tools do it will probably gain more features over time.
A big positive I see for using YouTube Video Editor is its simplicity. If all you need is to take some unedited video, trim a bit from the start or end, and add a musical soundtrack without worrying about copyright, you can have a decently edited video in a short amount of time. I also see several drawbacks to using YouTube Video Editor in a K-12 setting. First of all, you can’t work narration into the video unless you do it before uploading to YouTube, and then you cannot use YouTube’s music for a soundtrack option for the video because it will completely replace your original narration. Using AudioSwap music as your sound track may also result in advertisements being placed on your video. Second, the final video is rendered on YouTube and not downloadable, so anyone you want to share the video with must have access to YouTube and you cannot make a local copy for archival purposes. Third, you have to make sure you have permission/rights to post all of the media and people in the video publicly to comply with YouTube’s terms of service. The last drawback is not specifically related to the editor itself, but the fact that YouTube is blocked in many K-12 settings due to the necessity of CIPA compliance. 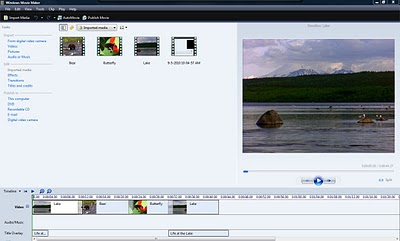 I also experimented with Windows Movie Maker on my Windows Vista computer. Before using Movie Maker to edit any video, I found an excellent online tutorial at the Teacher Training Videos website. The tutorial was well paced and very thorough, which helped me with understanding how to use Movie Maker even before I opened the program. In watching the tutorials and using the program, I could see that Movie Maker is much more robust than YouTube Video Editor. Right away the ability to combine multiple video clips along with individual digital photo images stood out for me. Movie Maker will help you capture video or photos directly from a digital camera or it will import clips and photos you already have stored on your computer. Once you arrange your media in the order you would like it to play on a video editing timeline, you can choose from a selection of forty-nine different effects such as panning, zooming, pixilating, and changing the look of the film to make it look antique. There are also sixty-three different transitions that can be inserted between clips as visual aids in moving between portions of the video. To help in making the most effective use of effects and transitions, Movie Maker also has a split function, so long segments of video can be separated and extraneous sections cut out using the clipping feature. Movie Maker has a function which will allow you to record narration directly into the video and balancing features which allow you to quiet or mute any original audio that imported as part of the video so your narration can be heard over the original soundtrack. Optionally, you can record your narration using another program such as Audacity and then import it into your movie. As a final, professional touch, Movie Maker also has features which help you create titles and credits for your video.
After experimenting with Movie Maker, I felt I had used a program that would allow for the kind of editing referenced in the Desktop-Video-Guide.com (n.d.) article. One of the big positives for me as someone new to video editing was even though it is a feature-filled program, Movie Maker was relatively simple to use after watching about an hour’s worth of tutorials. I’m sure a teacher or student with more video editing experience than me would find the program intuitive without needing to watch a tutorial. A second big positive is the fact that Movie Maker comes for free with Windows XP and Vista. Movie Maker is not included with Windows 7, but version 2.6 can be downloaded from Microsoft and installed on your Windows 7 PC.

The potential for sharing your final projects is increased by using Movie Maker over YouTube Video Editor. Movie Maker has multiple options for rendering the final videos, including publishing in .wmv format which will play in Windows Media Player on a PC. If you want your movie to be cross-platform without having to upload it to the web, you can export it in .avi, a more universal format which will allow your video to play in QuickTime on Mac and Windows computers as well as in Windows Media Player on PCs.

In a contest between YouTube Video Editor and Windows Movie Maker, Movie Maker wins for me. I feel Movie Maker is more robust in its features while remaining simple to use in a K-12 setting, where computer time is often a precious commodity and less-steep learning curves for software mean more time for accomplishing meaningful projects. I enjoyed learning about and using both programs, however, and in the process learning more about video editing itself. I look forward to using the techniques I experimented with in the remaining weeks of our class.