I've been thinking a lot lately about educator professional development. As an instructional technology specialist, I have the privilege of helping my colleagues grow in their knowledge and implementation of technology in the classroom. This happens in a myriad of ways. In just the last few weeks, I have taught planned sessions to groups of teachers, I have made one-on-one appointments to assist individuals with specific needs, and I've even helped to design and facilitate my district's first completely online PD experience.

As I design these learning opportunities, I am constantly thinking about how to make them meaningful for teachers so that in turn the information shared will make an impact on student learning. Regardless of the topic, I've found that there are some consistent practices on my part that seem to contribute to making the sessions successful.

Before I delve into what I think those consistent practices are, I have to share what started my wheels turning on this topic. It goes all the way back to this year's summer staff development in my school district, where a colleague and I who often plan and teach PD together received some of the highest compliments either us could remember receiving. We received these comments from several teachers who took time to speak to us face-to-face, rather than just leaving their thoughts on the end-of-class surveys, which is why they made such a profound impact on me. I will have to paraphrase a bit because I've slept some since then, but the gist of the comments was that my colleague and I were greatly appreciated because we were knowledgeable in the topics we were covering, organized in our delivery of the content, and we were not arrogant in our manner of presenting the material to the teachers.

I distinctly remember one teacher telling me, "You haven't forgotten what it's like to be in the classroom." That last comment touched me deeply because of a personal/professional commitment I made when I moved out of the classroom into a full-time instructional technology position in 2001: For as long as I held a position supporting instruction, I would never forget the perspective of the classroom teacher and the realities of the environments they work in every day. I worry sometimes that despite my resolve, the longer I'm out of the classroom, and especially the longer I am not stationed on a campus, I will lose touch with reality as teachers know it. The colleague who made this comment to me this summer has no idea what he did for my own professional morale.

So now you know what got my wheels turning. Although it is important to seek continuous improvement in our professional practices, I think it is equally important to reflect on what you already do well so you don't throw out the good stuff when seeking improvement. Here are the things, based on my own observations and participant feedback, that I think contribute to impactful professional development experiences for teachers. They are not listed in order of importance, because I think they are all equally important.

Been Thinking About CTRL+F & Technology Basics

I read an article, "Why Don't We Teach Kids How to Use CTRL+F?" a couple of days ago and it reminded me of two things:
For instance, did you know that CTRL+F  is a key combination that works for searching a web page or document in every standard web browser and in Office and PDF documents? It's a shortcut that's been around for a long time. I think I learned about it a couple of years ago and still don't use it consistently. How much of my time has been wasted by scrolling when CTRL+F could have taken me to the info I need so much faster?

If you didn't know about CTRL+F, don't feel bad. According to the article, 90% of folks don't know about it. But now you know, so use it, and pass it on to others!

Why do 90% of us, teachers and students included, not know about such a fundamental computer skill? I encourage you to read the article, as it is relatively short and talks about more than just using CTRL+F, including a few observations about why basic computer literacy might be low on the priority list in education.

After you read it, come back here and share your favorite "computer basic everyone should know" and/or your thoughts on the conclusions drawn in the article. 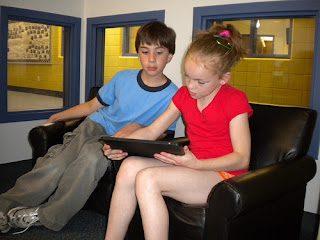 Did a great deal of research via Twitter, Skype, in preparation for bringing iPads to students. Buy-in from the community - parents came to informational meetings. There was a lot of interest! Teachers were given iPads the summer before school year began. 2000 iPads for Westlake High School students.

24/7 Access to knowledge and collaboration - Students use Facetime to attend class even when they are absent.

Researched netbooks, playbooks, but went with iPads because of number of Apps. No longer need document cameras or wireless slates to control computers because Apps have replaced those functionalities.

Summer before distribution, upgraded wireless infrastructure. Access points in each classroom and a new controller. So far no wireless issues with 2000 new devices on the network.

iPads handed out on third day of school. Five minute AUP video shown to all students when they received the iPads. Barcodes laser etched into the backs of the pads.

Created a "juice bar" (based on Apple "genius bar" concept) in the Westlake HS library so students can help students with their iPads. Apple training students to run it.

Small pilot with check-out iPads and 30 SPED iPads one year before implementation.

Students and teachers presented proposal to the board. This was key to getting approval because it wasn't just coming from the technology department.

Tip: Some developers will give you a code or two to download a free copy of their apps so you can evaluate them. You just have to ask.

Students and teachers can install their own Apps. They request codes from tech department or department heads for paid apps.

iPads are not really meant for multiple users.

Synced an iPad with FREE Apps and content, used iPhone Configuration Utility, Created Backup of iPad then restore backup individually to other iPads. Similar to building an image for the iPads.

Syncing is managed by the technology department. All iPads synced to one iTunes library and Apps are added as requested. iOS updates had to be done individually and were very slow. Hoping with iOS 5 that this will be easier.

Challenges: Multiple users on each iPad made getting content off the iPads difficult. Teachers wanted more control of apps on devices.

App Licensing: Personal iPads can have one copy of an app and put on as many devices as you want. But educational institutions must have a license for each app on each device. http://www.apple.com/legal/itunes/us/terms.html.

Volume Purchase Progam (VPP) Setup: Developers have the option to provide a 50% discount on their Apps. Three key roles:


Additional Notes during Q & A

There is a trick when you create an iTunes account for setting it up without a credit card.

Flash support is improving and virtual desktop apps exist so you can run Windows on the iPad.

Teachers having ability to sync helps them have more investment in using the devices in instruction.

Eanes has Deepfreeze so devices are not backed up to district computers. Teachers and students sync at home. At one time they redirected iTunes to a Thawspace on the local computer.

Update June 2012: If you found this post valuable, you might also benefit from this series of posts I wrote based on sessions I attended at iPadpalooza on June 19, 2012.

On October 13th I'm helping facilitate a breakout session at the TCEA Fall TECSIG meeting. The theme of the session is Social Media & PLNs, so I prepared a Prezi (my first ever; please take this into account if you peruse it below!) which provides an overview of how my PLN has been built over the past couple of years.

Although meant as a visual aid for my presentation, I tried to put enough detail into the Prezi so it could stand somewhat on its own. I would appreciate feedback on it, even though I probably will not have time to do too many tweaks before tomorrow.

If you are visiting this post and taking time to read it, you are a member of my PLN! I'd love to show the session attendees a PLN in action. Would you take a few moments to comment on your own PLN participation? What are your favorite PLN tools/activities? Is there a specific instance in your experience when you can recall your PLN proved to be a valuable resource to you or you to it? Anything you wish to share will be appreciated! 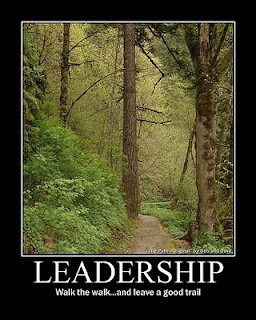 Whatever your role in education (or any other profession), you are probably a leader of someone. The leadership role may be formal, such as that between a teacher and students or between a superintendent and district staff, but it may also be an informal role as well. Perhaps you are the teacher in your grade level who is most innovative with technology or you are a content area specialist who consults with educators on an informal basis. Certainly, in your non-work roles, there are children, other relatives, or friends who look to you for leadership in some area of their lives.

We are all leaders somewhere or somehow. As such, we should aspire to become better leaders, for the sake of those who look to us for guidance.

Last weekend I had an opportunity to participate in a Leadership Forum sponsored by the Texas Computer Education Association. What I appreciated about this forum, in addition to the fact that the contents gave much food for thought, was the fact that it was open to any member of TCEA who wanted to participate. And, it was free! Can't beat that - a self-improvement opportunity that cost me only an investment of time and gasoline.

The principles shared in the forum were based on the book Good to Great by Jim Collins. I was fortunate to win a copy of the book as a door prize at the end of the event and look forward to reading it. We discussed levels of leadership and what different leaders look and act like and how we could work on improving our leadership skills. I could recount that here, but, I think you'll get more out of reading the book or taking part in a similar workshop. :-)

What I do want to share is the results of one of the first activities we did during the day. We were asked to list the Characteristics of the Greatest Leader We Personally Know. It could not be a famous person, unless we really knew them. I had no trouble picking my person. I reflected back on the first principal I ever worked for, Dr. Jo Ann Ford.

These are the qualities that came first to my mind in the time limit we were given:
You can read books and attend seminars to increase your capacity for leadership, but those are not the only ways to improve. Think of the people in your life who are a joy to follow, and then think about why. Choose one of their qualities that most appeals to you, and strive to appropriate that quality for yourself.

If we all made it a goal to become better leaders for the benefit of others, think how much we could accomplish together!!!

What are some of the characteristics of a great leader you personally know? Share in the comments, or reflect on them in your own blog post and share a link below. We can all be inspired to grow by the great leaders you share!