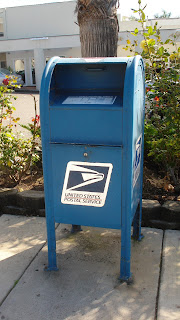 They are word processed, printed, signed, stuffed in envelopes, addressed, stamped, and waiting to be mailed in the morning.

What are "they"? My letters to Governor Rick Perry, Senator Steve Ogden, and Representative Larry Gonzales. That's what.

If you are Tweeting and Facebooking and blogging, great. If you are consuming information on the budget crisis, also great. If you are talking to your educator and noneducator friends, even better. But make sure you don't forget that the people who most especially need to hear you are in Austin, Texas, right now. And they won't hear you if you aren't emailing, writing, and phoning. Often.

Below is the text of my letter to Senator Ogden. My letters to Perry and Gonzales were similar, although I customized them a little to each person. For example, I thanked the governor for his support of the Texas Virtual Schools Network and mentioned to Representative Gonzales that I know he's close to public education issues since his wife is an educator.

Feel free to read my letter and use ideas from it if you like. Your letter will be more impactful if it is full of your ideas, however. They need to hear each of our individual voices in Austin.

I am writing you as your constituent, a proud Texan, and a professional educator who has spent my entire eighteen year career investing in the education of children in Texas public schools. I am gravely concerned about the future of our children’s education.

Governor Perry’s words from his governing principles regarding education in Texas speak volumes toward my concerns:

"The single most effective step a person can take toward a better life is getting a great education, and Texas has made a concerted effort toward creating better, more accountable schools to make a great education easier to achieve during a time of increasingly global competition."
Source: http://governor.state.tx.us/initiatives/education/

Texas public schools and the educators they employ have made concerted efforts toward meeting the high goals demanded by the citizens of Texas and our federal government. They cannot continue to make these efforts, however, if they are not adequately funded. They simply cannot cut operational and program costs to the degree necessary to make up for a projected $10 billion shortfall in education funding from the state. Without adequate funding, school districts who dedicate 85% of their budgets toward salaries will have no choice but to lay off teachers.

An estimated 100,000 educators out of work when the final school bells ring in May 2011 will be devastating to the ability of school districts to properly differentiate instruction for students, offer them innovative programs, and continue to increase student achievement as new testing requirements come into play in the 2011-2012 school year.

I urge you, Senator Ogden, to lead during this budget crisis and encourage the use of the Rainy Day fund to mitigate the projected budget deficit. I also urge you and our legislature to come up with a reasonable and sustainable plan for funding schools in Texas. The current plan, which ties districts to target revenue from 2006, does not take into account cost increases for goods and services, and it further restricts districts by withholding state funding if they increase local funding, effectively giving them no recourse to increase revenue to make up for the looming state shortfall.

I also believe an increase in the state sales tax or another means of increasing revenue for the state should be considered. When there is not enough money to make ends meet, sensible spending cuts can be made and supplemented with additional revenue streams. This is how families and companies balance their budgets. Texas should do likewise.

According to the Texas Legislative Study Group, our state has the second highest public school enrollment in the nation, but ranks 38th in expenditures per student, 43rd in our high school graduation rate, and dead last (50th) in the percent of adults 25 and older with high school diplomas (Source: http://texaslsg.org/texasonthebrink/). To increase these standings and stay globally competitive, Texas must prioritize funding public education to provide the best education it can for its students and attract the best educators to its schools.

Senator Ogden, you have had my vote in each of your elections. As a concerned citizen and voter, I hope you will take a hard look at the devastating effect a “cuts only” approach to balancing the budget will have on our children who are the future of Texas. I also hope you will prioritize addressing our current budget and funding issues while putting new initiatives on the back burner. I must admit, I was confused as to what your priorities might be when I read about the recent constitutional amendment you proposed to require Texas to fund textbooks for private schools at a time when we do not have enough money to adequately fund public schools.

I will be closely watching how education budget issues are addressed during the 2011 legislative session, and my future voting decisions will be heavily influenced in favor of state leaders who are proponents of a strong education system in word and who follow up their verbal support with the financial support our schools desperately need.

Thank you for taking the time to read my thoughts and concerns on education funding in Texas.

I've done my civic duty. Now it's time for you to do yours. Not sure where to start or need to catch up on some facts? Check out my previous posts on the Texas education budget crisis.


Mailbox photo used with permission from http://www.morguefile.com/archive/display/733099
Posted by Sandy Kendell on March 06, 2011