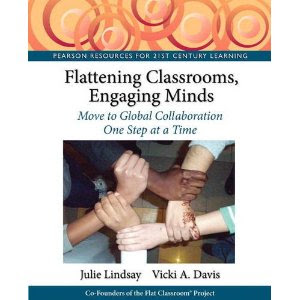 
Book was three years in the making. Steve says it's like an encyclopedia of how to use Web 2.0 to make education connections. Julie says they really wanted to highlight the work of many great teachers. It is not just about Julie and Vicki.

Vicki says they wanted the book to be an experience that is encouraging. Helping to take Web 2.0 from the early adopters to the main stream. Wanted to tell the story of the classroom teacher and show these things are really happening. It doesn't take a lot of money, but a community of practice to scaffold the learning and collaboration.

Steve loved the quotes from the teachers in the book and an email that shows how Julie and Vicki first connected with each other. They first connected in the K12 Online Conference in 2006. By reading Vicki's blog after that, she saw Vicki's students were reading The World is Flat. Julie's students were also reading the book, so she left a comment on Vicki's blog and the first Flat Classroom project was born through connecting their students. Something magical happened - and that's how it all started!

Thomas Friedman (author of The World is Flat) and Don Tapscott played into the first project. Friedman emailed Julie two weeks into this first project. This email helped them realize they had something and needed to make it scalable. Tapscott was writing Grown Up Digital and also contacted them and helped spread the word with what they were doing. This also encouraged Vicki and Julie to want to nurture other teachers in starting similar projects because they were supported in their first project. Sort of a "Pay it Forward" investment. Humility is important in helping others.

Who is the book for? Julie says for anyone involved in education. Individual educator, school, and student. Professional developers, teacher educators. It's full of stories, tips, tricks, tools, and methodology. There is something for everyone at every level.

"Visionary educators realize global collaboration is not an extra but a pedagogy." (paraphrased quote from book). Vicki says when there is massive change, there is great opportunity to benefit. She showed a chart which shows we are going to have a massive shortage of knowledge workers in the U.S. in the coming years. Where will they come from? You cannot have a world class education without the world.

One of Vicki's biggest problems with the ed reform movement is it keeps talking about what isn't working instead of offering solutions. For example, Vicki asks her admins to evaluate her students' portfolios instead of just coming to observe her for thirty minutes a few times a year. They use Weebly for efolios and post projects on Wikispaces. Teachers today need hope and they need to know there is a way to do this.

Also, there is no excuse to not reach every child with today's technology.

Julie says it is incredibly important for students to have choices. They need opportunities for personal success. Don Tapscott talks about customization of digital tools which leads to customization of learning environments.

Steve says there is a deep thread in the book about the changing role of teachers and how things start with them. Vicki cites the Hawthorne Effect in the book. Chapter 2 covers the role that research needs to play. Hawthorne Effect tried to study what caused productivity to go up in a factory and found that everything did. It was an effect of being studied. So, learning can improve by doing pilot projects. In the Flat Classroom projects, there are researchers observing what is going on. Students do not know who they are, but it allows others to study what is working. It is time for research to evolve and look closer at collaborative projects.

There is great opportunity to improve learning in all areas, no matter how small or large the local area where students are learning.

It is important for teachers to look at their own practice and how technology affects their every day lives personally and professionally. Teacher needs an essential understanding of what the tools are about and digital citizenship issues. They have to be hands on; can't sit back and just let the students use the tools. When teachers come into projects for the first time, it is often a steep learning curve for them. One thing Vicki and Julie do is run Flat Classroom teacher certification courses for teachers before they do their first project or while they are doing their first project. Certification covers most of the content of the book.


Most projects are free. A few projects require them to hire a few people so they have nominal fees. Preservice teachers and higher ed professors come into these projects as advisors.


Communications in the 21st Century


Students do NOT innately understand technopersonal skills; they must be taught appropriate behavior and digital citizenship. These lessons cannot be learned in walled gardens.

What is the impact of these programs on ethnocentrism? We can scaffold inter-cultural communication and understanding using technology. No longer are we just reliant on student exchange programs for this. Technology breaks down barriers and helps us understand cultural differences. Different holidays, beliefs, family situations, etc, lead to more awareness of global citizenship. The projects help get people out of their comfort zones. Some live events/trips help supplement the experiences.

Cultural exchanges do not happen without friction. On the first project, Vicki had a parent who thought the students from Bangladesh were going to come through the computer and bomb them. Another example was that her students came to her and said "The news is wrong, all Muslims do not want to come here and kill us." On profile pictures, arms need to be covered. Saying "Yes, sir" like we do in the South in the U.S. is considered rude in the UK. Vicki says 98% of the problems they encounter are due to technical accidents. One of the main things she hopes to teach students is to give others the benefit of the doubt. Building good techno-citizens will serve them well throughout their lives.

Julie on professional development (Chapter 11). Need to work the back end as well as the front end on these projects. This is why there are conferences and the teacher certification projects. You can bring this back to your own school in a methodical way. Process and project based - not just one off lectures or one hour of hands on, etc. Everyone can move folks in their own environments forward.


Questions from the Audience:

How do you deal with social media website age limits for elementary students? It's not one size fits all. There are different rules in different countries. Kid friendly sites are Wikispaces, Edmodo, Diigo. Look for others working with kids in your age group and emulate what someone else is doing. If you have a conservative administration, find a project and show it to them. It doesn't have to be scary.

What does flat classroom mean? Bringing the world into your classroom and putting your classroom out in the world in a safe and productive manner. Combine what you are doing in your classroom with what's going  on out in the world. Also, teachers are no longer the sun with the students orbiting them. They are now the Star Trek Voyager moving around and guiding their students. Also bring in pre-service teachers and professors - flattening between K-12 and Higher Ed. Students can be moderators and mentors for adults. So flattening between the generations too!

How does teaching about global citizenship happen? There is a lot of unintentional learning. Oh, you can't use YouTube in China? How do you introduce yourself to someone from another culture? How do you create a professional learning environment? VERY important for future employment?

What kinds of responses do you get from previous students in the program? One student got into college and was differentiated because she had managed an international team. One of her former students is now studying social media in college and had been on Twitter since it was five months old and had been doing wikis since he was in 10th grade. His college classmates thought these technologies were all "new". He now believes that it's too late when everyone thinks the technology is a good idea (he thought Twitter was stupid when they first learned it). Vicki doesn't care if her students thank her today, but wants them to thank her five years from now.

This was an awesome webinar! I definitely need to get this book! Thank you Steve, Julie, and Vicki!