Reflecting Upon Teaching With Technology

The following post was written as a reflection on my learning during the fifth and final week of a Teaching with Technology course I am taking as I pursue a master's degree in educational technology leadership. 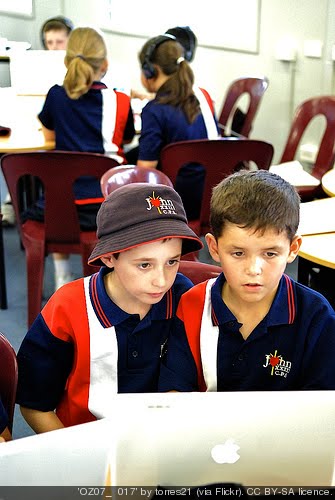 As an educator, I am quite opposed to the word "stupid" when referring to a person. And yet, as we wrap up our Teaching with Technology course, a repurposed political phrase is circulating in my head. "It's the learning and assessment, stupid."

I do not really think our leaders are stupid, but I do think they have missed the point for quite some time. For years, we have been trying to get teachers to use more technology, to not let those computers in their classrooms collect dust. All the while also building the climate of high-stakes standardized testing, which says every child will perform at an expected minimum level on tests presented in the same medium to everyone.

So, as James Paul Gee says in his Edutopia video Grading with Games, schools have become "test-prep academies" where it is too risky to use digital tools like games and social networking to teach because they don't have enough "skill and drill" focus which is what helps students pass standardized tests. The computer, which could be helping differentiate instruction, often becomes an expensive tool for drill and practice. The potential for true transformation in the classroom is wasted. We have a dichotomy in place where we know what kind of learning is most beneficial for preparing 21st Century students for the world of today, but our schools are still judged on how well they prepare students for the 20th Century.

What is the answer? How about lessening the importance of THE TEST and increasing the importance of real world problem solving? This Vision for 21st Century Learning video was intriguing to me, as it shows a possibility for authentic learning and assessment through simulations which would connect students to the ancient world.

But I am just one person. I cannot institute on my own the paradigm shifts required to make 21st Century learning and authentic assessment a reality in today's classrooms. Unless I redefine paradigm shift. An entire educational system can make a paradigm shift. So can a person. Maybe for now, until Gee's modern Sputnik comes along to spur the overhaul of education that is needed, I can focus on helping individual teachers move toward constructivist and connectivist practices. I can show them how technology can support them and their students in these new endeavors. We actually made our drop in the bucket this school year by starting a Moodle initiative. At least five classrooms I'm aware of are now experiencing blended learning environments. The word is getting out and more teachers want to try.

My own mini-paradigm shift because of this course has been toward concentrating on teaching, not technology. For the sake of some test-prep academies I know and love, I'm going to look for ways to sneak the good practices in. Then, hopefully, when the change really does come, we'll have teachers ready and waiting to lead us in 21st Century learning - because they've already been there.
Posted by Sandy Kendell on December 18, 2009